Now, the last step is to vote from amykarp.com – you all decide who the winner is! This poll will close on November 2nd, 2010 at midnight! Remember, the winner will receive an engagement session from Dallas Wedding Photographer, Amy Karp AND a bouquet from DiFiori!

In case you missed anything from the contest, you can check out the page here. 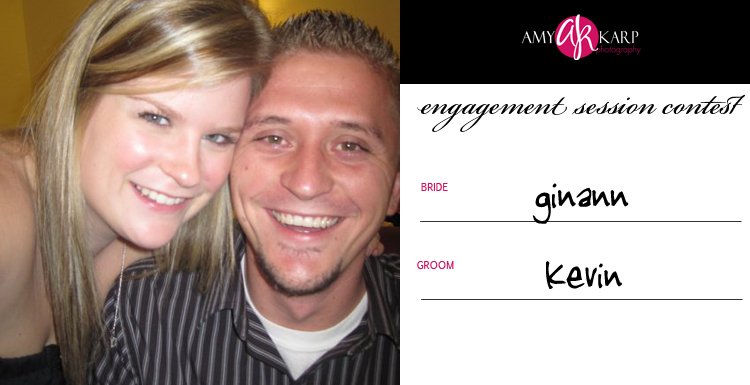 Ginann & Kevin were the top finalists with 220 votes!

Story :: Kevin and I have been together since I was 13… yes, the 8th grade! He was 14 at the time and it first was a small crush that eventually became more. I am now 23 and we have become recently engaged.

We were together all through high school and into college. In high school he was prom king and I was prom queen first runner up – that was definitely an upsetting moment… but I look back now and realize how great of an opportunity it was to experience the feelings of being so close.

When college came around, we both went to 2 different colleges – about 2.5 hours away from one another. We had no problems with the long distance. Every other weekend we would go back and forth between the schools to be with each other. We were able to experience different things that I feel wouldn’t have happened if we went to the same school.

I graduated in May 2009 and he graduated December 2009. College was a huge accomplishment to the both of us. We have seen each other grow together and it’s been a wonderful ride!

In January of 2010, I won a trip to Las Vegas and decided to take the trip on my 23rd birthday in March. Little did I know, he was planning something up his sleeve. On the night of my birthday, we decided to go up the Paris tower and experience the view from that high up. Once we were up there, he got down on one knee and asked me to marry him. It was one of the best moments of my life… I was completely shocked and did not expect it at all.

So here we are now… planning a wedding to be held October of 2011. Fall has always been my favorite season and the weather is absolutely gorgeous. We would love to win this contest because we are currently buying our first house and didn’t leave a lot of room for engagement pictures which is the most important thing! I want our engagement pictures to be something we remember forever… everyone has seen us grow together and I cannot wait to experience our wedding with the ones we love. We wouldn’t be who we are today without the help and support from our family and friends! 🙂 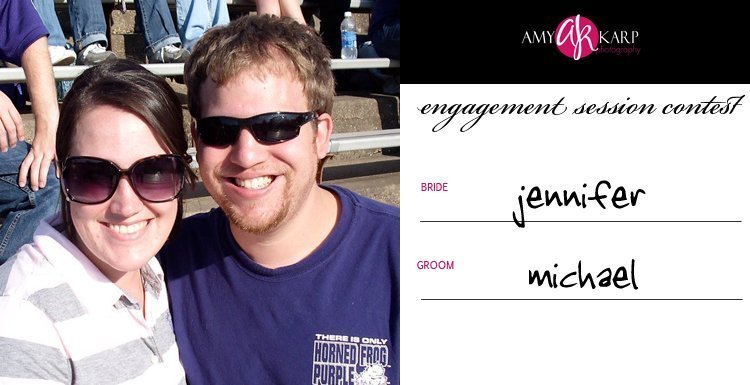 Jennifer & Michael were a close second with 206 votes!

Story :: Michael and I have known each other for 6 years, 5-1/2 of those years we have been in a relationship. We have lived in the same town, lived 3 hours away from each other, lived an hour away, and back in the same town again, so we have constantly kept each other on our toes. I sincerely believe there is no one else on this planet who can deal with me and visa versa with him.

However, if you had asked me when we first met if I would be engaged to him 6 years later I am not so sure I would have said yes. Michael had long curly hair, a bubbly personality and worked at The Gap. At first meeting, I was honestly not even sure if he liked girls or not (he is going to KILL me for sharing this, haha) but after a few months of becoming fast friends I knew we had something more, and I thankfully confirmed his love for females 🙂

Over the years we have continued to surprise each other… I discovered Michael had an intellectual side: he loves all things history, espcially World War II, literature, art, and he will even take to me to the opera and ballet from time to time. Michael was shocked when I beat him at Mario Kart the first time, he loves that I will talk football with him even when I may not know too much about it, and our favorite thing to do together is attend every TCU football home game.

On September 26, 2010 Michael gave me the best surprise of all – he proposed to me on my 26th birthday, which was extra special because it was my “golden birthday” (I turned 26 on the 26th). I can’t wait to spend the rest of my life with this man that I love so we can continue to surprise each other forever! 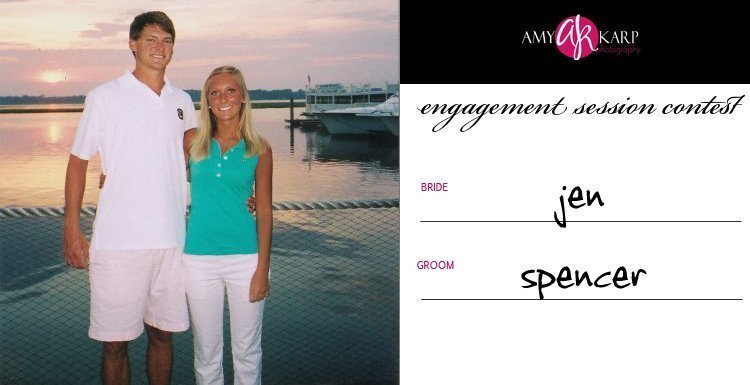 Jen & Spencer were the third finalists with 90 votes!

Story :: Jen and Spencer first met in 2007 while both attending the University of South Carolina. They met through many mutual friends at school which wasn’t too hard since their fraternity and sorority houses were next door to one another. Spencer is a Kappa Sigma, and Jen a Chi Omega. After Spencer graduated, he moved back home to Dallas for a new job at a consulting firm while Jen finished up her junior and senior year with a marketing degree. Those two years felt like an eternity! Yet they both traveled back and forth from South Carolina and Dallas to spend time with each other. Distance certainly made the heart grow founder and Jen decided to move to Dallas for a job at an advertising agency after graduation. In September, Spencer and Jen flew back to the University of South Carolina for a football game for a weekend full of friends and laughter and a good ol’ football game! Saturday morning before heading up to the tailgate at the football stadium, Spencer brought Jen onto a beautiful historical part of campus and got down on one knee. In complete shock, Jen said yes and a moment later her family and his family come running over. They had been hiding behind some shrubbery down on campus! Jen and Spencer along with their family and friends celebrated all weekend long back in South Carolina where they first met. It was amazing to be around all the people they loved for this unforgettable weekend! And to top it all off the Gamecocks won the game against University of Georgia!

This site uses Akismet to reduce spam. Learn how your comment data is processed.

Introducing Mr. and Mrs. Truty!! What an honor it

Some behind the scenes fun from yesterdays wedding

Still trying to decide if yesterday was all a drea

An absolute gem in the heart of the city — Nashe

Every event I’m trusted to document has a specia

Cheers to the last weekend for a while without a w

find your way AROUND